High time for high-rise, or a grab for green belt? Solving the affordability crisis is key 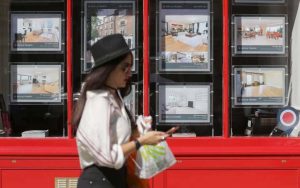 With the number of home buyers rapidly falling, the Government must take action, writes Anna White

The number of homes available for sale in estate agents has been steadily declining .

Britain’s broken housing market has become a national problem. The UK now has the fourth-lowest level of home ownership in the European Union, with the number of owner-occupiers aged between 25 and 34 falling from 2m in 2001 to 1.3m last year.

Rapid urbanisation and a burgeoning population, combined with a 30-year failure to build enough homes, has rendered cities such as London, Edinburgh, Bristol and Oxford as no-buy zones for many.

Former chancellor George Osborne inadvertently promised a ray of hope when he warned that a vote to leave the EU would trigger an 18 per cent fall in house prices, but a new study has revealed that the affordability crisis is set to worsen over the next five years. The time it takes a couple to save for a deposit will lengthen from six years and three months in 2016 to seven years and three months by 2021 – an 11-year high – according to research from Hamptons International.

It now takes the single saver 10 and a half years to scrimp together a deposit. This will grow to more than 12 years – a 16-year high – by 2021 due to the conspiring conditions of inflation, interest rate movement, sluggish wages and creeping house price growth.

That will leave the lone first-time buyer with 12pc less income, after paying tax, national insurance and basic living costs, to service an average mortgage, with three per cent less for a couple, the analysis showed.

“Things are not going to get easier for first-time buyers because of the effect of inflation on household finances,” explained Hamptons’ Fionnuala Earley. “The recent fall in sterling will hit the cost of essentials hard, such as food and fuel.”

Economists at the Ernst & Young ITEM Club have forecast some respite in the short-term as a weaker economic backdrop softens housing demand. But this breather will be short-lived. “Over the next five years house prices are likely to rise by 23pc, slightly ahead of earnings growth of 19pc, suggesting a further modest deterioration in affordability,” said Martin Beck, ITEM’s chief economist.

To address the affordability crisis Theresa May’s party has set a target to deliver one million new homes by 2020, the details of which should be outlined in the housing white paper expected this month. But which solutions are the experts backing?

The obvious white knights – the volume housebuilders – are not the answer, according to Jon Gooding, chief executive of housing charity Dolphin Living. “The Government wants us to build on brownfield sites and given the scarcity of land this means building high,” he said. “High-rise schemes release a lot of supply at once, making developers reticent and nervous.”

There is at least one new kid on the block. Legal & General, the giant pension fund, started production of its first prefabricated homes last month in a new 55,000sq ft factory in Yorkshire, promising 3,000 new units a year.

This is a bandwagon that Berkeley Group chairman Tony Pidgley has jumped on – 20 per cent of his group’s output will be modular. Rival Crest Nicholson has revealed plans to build 2,000 modular homes. The first prototype will be unveiled next month.

The Government, impressed by the speed at which modern prefabs can be erected onsite (in some cases 48 hours), is also expected to announce ways in which it will incentivise banks to lend to modular housebuilders.

“Efficiencies can be found from building off-site and manufacturing workers are estimated to be up to twice as productive as construction workers,” said Nick Whitten, residential research director at consultancy JLL.

Since the autumn the Government has announced a series of funds to support housebuilding. A £3bn pot will support small and medium-sized companies – those building fewer than 500 homes per year – to supply 25,000 homes by 2020. In October, Sajid Javid, the Communities Secretary, pledged a £2bn loan to accelerate development on public land. The Government will partner developers to deliver 15,000 homes by 2020.

As of January 5 housing providers can bid for a share of a £7bn fund to create “thousands” of affordable homes. However, this figure is compiled from previous announcements.

This piecemeal approach continued with the announcement of 48,000 new units through 14 new garden villages and the delivery of 200,000 starter homes to be sold at a 20pc discount – both of which have been scoffed at by the industry as the regurgitation of stale ideas. Neal Hudson, a member of Residential Analysts, warned that these units could be difficult to value and may even create a distorted sub-market.

“Don’t kid yourself that this will make properties more affordable,” said Henry Pryor, independent buyer. “The undersupply that we have been racking up means that if we had the million homes by the end of this parliament it still would not be enough.” He recommended the reclassification of the greenbelt.

“We need supply to keep up with demand but it must be where people need it, while trying to avoid the situations where house price growth becomes unsustainably high and out of kilter with wage growth,” JLL’s Whitten concluded.

With property prices at an at an all-time high in some locations, it’s understandable that one might assume that land value is increasing in line with the value of housing, however this is not always the case. In this blog we take a look at the method for valuing land to help you understand the reality of what to expect from your land valuation. When landowners approach us, there can often be an unrealistic expectation relating to the perceived value of their land. The recurring misconception is that the land is worth is in direct correlation with the current property market but the reality is more complex. The process of land valuations...